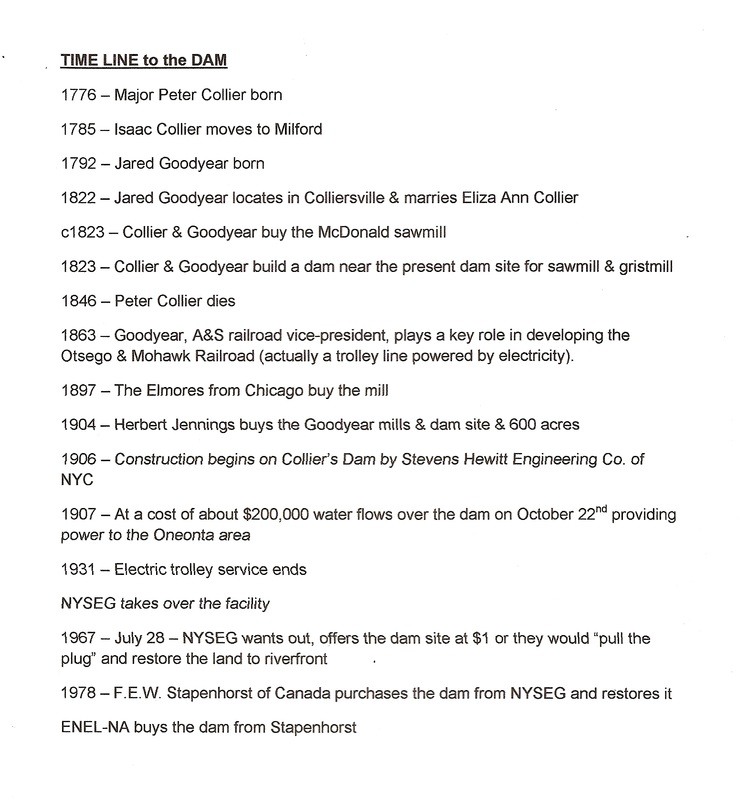 Tidbits from Times Past

Many thanks to Marilyn Bailey and Wayne Wright for locating items in the NYS Historical Association collection.  Thanks, too, to Bruce Shultis for access to the Lake Association materials.  The following "tidbits" have been excerpted from the early minutes by Francine Stayter.

For members of the Goodyear Lake Association, the lake provided a seasonal place for fishing, swimming, and getting out of the city of Oneonta, especially during the summer months. Ken Yager served as president and C. W. Southworth as secretary from 1934 - 36. In 1934 the Association voted to stock the lake with bass, pike, pickerel, and perch. Walter Getter and N. Platt were responsible for putting the fish in the lake.

As before, the Association was concerned about the swimming facilities and the cleanliness of the waters. Elwyn Radley was paid $34.60 for cleaning the beach, putting sand on the beach, and repairing the diving board so that it extended over deeper water. Additionally, a $.10 fee was voted on for the use of the bathhouses. The money collected would be used clean and maintain the bathhouses. Elwyn Radley also notified the group that, since the lake was state water, it was against the law to throw rubbish in the water and that people who did so were subject to arrest. Parties found to be disposing of rubbish and garbage down the banks would receive a letter from the secretary.

It’s hard to imagine Goodyear Lake without the roads we now take for granted, but many of these roadways were either non-existent or dirt pathways in the early to mid 1930s. Approval of the roads on the Cliffside by the town of Milford began in 1934. Mr. C. T. Waters did much of the early work on the roads before they were taken over by the town later in the decade.

During this time, winter meetings were held in Julian Jackson’s office in Oneonta, and the summer meetings were held in the Grove at Cliffside. Membership was an issue. Members in arrears for two or more years would be suspended and would have to go through the approval process to be granted membership. In 1935, 90 new applications for membership were approved. John Young was responsible for canvassing the Cliffside portion of the Lake and C. W. Southworth was responsible for the west side of the lake. Of the 90 new members, John Young brought in 77. Each canvasser was awarded $.25 for each new member brought into the Association. Among the new members listed were Vito Molinari, Maurice Barnett, and Jay Utter.
At a well attended meeting in July 1935, Mr. McElwain and Mr. Thompson of the Associated Gas & Electric Company came to speak to the members of the safety of the Collier’s Dam. The representatives assured members that the dam had been inspected and would be inspected regularly again by an expert engineer and that the results would be published in the paper. Plans were underway to recoat the surface of the dam. To reassure the members, Mr. McElwain explained that the dam was 70 feet thick at its base and anchored 6 feet below the bed of the river in solid rock. The dam was 200 feet long and anchored in solid rock on each side. As most of the members of the Association lived in Oneonta, they were concerned not only for Goodyear Lake, but the effect the failure of the dam could have on Oneonta.

During this time period building around the lake must have flourished as membership in the Association grew. As the membership grew, so too did the work of the Secretary. By unanimous vote it was decided that the secretary would receive an annual salary of $10 to recognize the work involved in the office.

In 1936 leadership of the Association was passed to Elwyn Radley. Nine members were appointed as directors: C. W. Southworth, J. Bookout, M. C. Riley, J. B. Jackson, Horace Stanton, Roger Coyle, Claude Mitchell, W. H. Lunn, and J. M. Bennett. Thirty-six members were appointed to the 7 active committees. During the 1936 and 1937, Radley remained as president. While no firm decisions were made, the Association spent much time discussing sale of property owned at the point and the possible purchase of property at the Grove. Neither issue was resolved. Members remained concerned about the roadways around the lake at Cliffside, the improper speed of boats on the lake, and boats without lights on the lake at night. Roads around Cliffside were named during this period. A committee was appointed to determine the names of the roads. Elwyn Radley was the president of the Association which led to Radley Road and Silliman’s Cove was already named, but there is no information in the minutes of how the other streets came to be named.

In 1936 – 39 the Association sponsored annual summer clam bakes. Members and their families paid $1 each for the clambake with any deficit in the cost being made up from the Association’s treasury. Membership in the Association numbered around 70. Members were solicited by direct contact, rather than by mail.

Despite the Depression, the Association remained active and involved in the improvement of the Goodyear Lake community through this decade.
In the NEWS- The Daily Star Article....


FileJessie and Ralph Eichler of Milford are shown in this Aug. 12, 1980, photo from The Daily Star, looking over the reactivated hydroelectric power plant at Goodyear Lake before dedication ceremonies. (Please visit the Daily Star to view the Photo)
You could almost hear the collective sigh of relief by Goodyear Lake residents and campers on Monday, Aug. 11, 1980.
What could have become a nightmare — the removal of the dam and draining of the lake — finally ended with a flip of a switch at 3:40 p.m. that day, putting the old hydroelectric dam back in operation.
A previous column chronicled the days after 1967 when New York State Electric and Gas announced plans to abandon electrical activities at the dam. The dam was falling into a state of disrepair and there were concerns of its eventual removal. The Goodyear Lake Association worked to create a deal with NYSEG and a Canadian firm, F.W.E. Stapenhorst, to restore and reactivate the hydroelectric plant and dam. The deal was confirmed in October 1978. Stapenhorst began renovations and by August 1980 it became time for a dedication ceremony.
“State Supreme Court Justice Robert Harlem, himself a Goodyear Lake resident, was master of ceremonies,” The Daily Star reported on Aug. 12. “He said it was ‘an unusual moment … one in which adversity was turned into advantage … through the enterprise of an entrepreneur (Stapenhorst).’”
Harlem also praised Fred Knott, another lake resident and businessman, for his efforts to save the lake and plant.
“No one was more tenacious (than Knott) in meeting the challenge,” Harlem said. “He saved Goodyear Lake for us. He ought to be remembered in a real way for what he did.”
Robert L. Moon, a NYSEG manager for the region, said that in abandoning the plant, his company first asked itself whether its customers should be asked — through the rates they pay for electricity — to subsidize an unprofitable operation.
“I commend Mr. Stapenhorst, who had the guts to tackle and solve the problem,” Moon said. “He brought down to roughly one-half the cost that would have faced NYSEG rate payers.”
Frederick Stapenhorst, president of the company, said that the power plant would generate 7.5 million kilowatt-hours of electricity annually, using turbines that were ideally suited for small hydro projects like Goodyear Lake.
Rehabilitation of the plant cost $1.75 million. Included in that amount was a $245,000 grant from the U.S. Department of Energy, a $10,000 interest-free loan from the New York State Energy Research and Development Authority, a $25,000 contribution from the Goodyear Lake Association and a $1 million bond issue at 7½ percent approved by the Otsego County Industrial Development Agency, as well as funds provided by Stapenhorst.
The privately owned plant was the first of 22 hydroelectric demonstration projects in the nation supported by the U.S. Department of Energy. Federal and state authorities said they’d be keeping a close eye on the Goodyear Lake operations, designed to operate unattended, automatically, 24 hours a day.
During the process of obtaining the license to operate the plant, Stapenhorst spoke of the realities of working with the government agencies in the United States, himself being a Canadian resident.
“We ended up with 265 pounds of paper in our license application,” he said. “Our eight-page report on environmental requirements was turned down. So was our 24-page report. Our 100-page report was accepted.
“We now know all species of reptiles in this area. We know every type of salamander in every shade and the number of toes they have — but I have never seen a single one.”
A ribbon-cutting event allowed a bottle of champagne to swing down against a concrete door jamb, but the bottle didn’t break. A Stapenhorst aide had to rap the bottle against the jamb a couple of times and succeeded.


Oneonta City Historian Mark Simonson’s column appears twice weekly. On Saturdays, his column focuses on the area during the Depression and before. His Monday columns address local history after the Depression. If you have feedback or ideas about the column, write to him at The Daily Star, or email him at simmark@stny.rr.com. His website is www.oneontahistorian.com. His columns can be found at www.thedailystar.com/opinion/columns/.